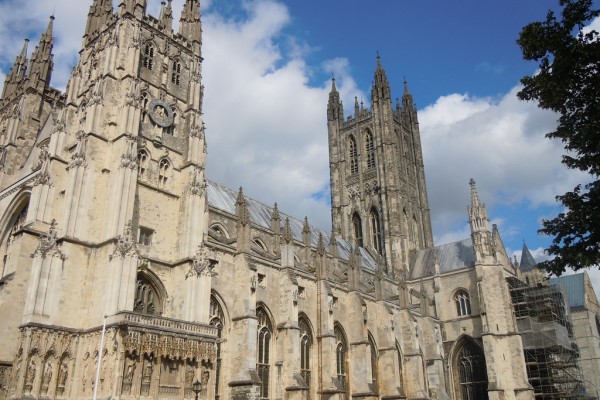 Canterbury was first recorded as the main settlement of the Celtic Tribe around Bronze Age times, was conquered by the Romans in the 1st Century AD and became an important settlement named “Durovernum Cantiacorum”, with new streets in a grid pattern, theatre, temple, forum and public baths. The Roman City Wall from the 3rd century AD is still remaining today. After the Romans left Britain in 410 AD, the city was renamed “Cantwaraburh”, meaning ‘Kent People’s Stronghold”.

The famous cathedral was founded in 597 AD, completely rebuilt in 1070-1077 and enlarged several times through the years. The famous murder of Thomas Beckett by knights of King Henry II happened here in the cathedral, in 1170. Pilgrims would travel here (some mentioned in the 14th Century Canterbury Tales by Geoffrey Chaucer). Canterbury Cathedral is the oldest Cathedral in England.

Canterbury was invaded by William the Conqueror in 1066, and a Norman Castle was built out of wood, to be later rebuilt in the early 12th Century in stone. By 1770 it had fallen into disrepair and many parts of it were demolished. The famous playwright Christopher Marlowe was born in Canterbury in the 16th Century and the theatre in the city is named after him. In 1787 all the Roman City Gates were demolished to make way for more traffic, apart from the West Gate (The City Jail). The world’s first passenger railway opened in 1830 between Canterbury and Whitstable using an ‘Invicta’ steam engine from Robert Stevenson, which can still be seen in the Canterbury Heritage Museum.

During the First and Second World Wars, Canterbury was the subject of many raids, and even had a WWI German bomber plane crash land near Broad Oak Road. Around 10,500 bombs were dropped on Canterbury during WWII.

Some recent famous names to have come from Canterbury are the actor Orlando Bloom (Lord of the Rings & Pirates of the Caribbean), comedian Alan Davies, and the singer Ellie Goulding.

Local Area around Canterbury
The Dane John Gardens in Canterbury is a lovely Park in the City Centre to sit in or walk around, or you can walk along the river, from the Westgate Tower Gardens, this riverside walk includes a wildflower meadow and historic water mills.

Shopping around Canterbury
Canterbury is a great shopping destination with the Whitefriars area offering High Street and Designer fashion, homewares, gifts and more, Fenwicks department store a little further on, and many small individual shops down the High Street including historic gifts, fashion, cathedral mementoes, English old fashioned fudge and sweets and more.

Some things to do in Canterbury: