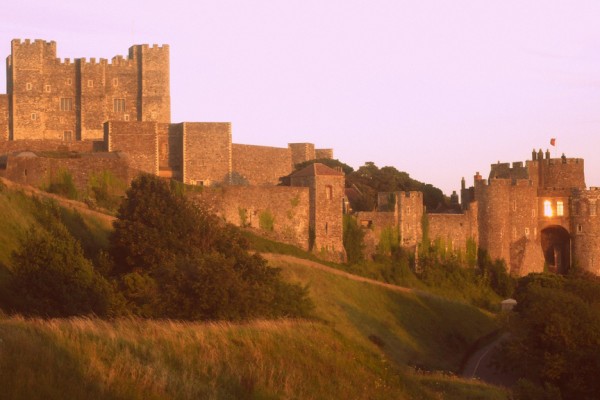 History of Dover Castle
Dover Castle is the largest castle in England, founded in the 12th Century.

There is a Roman lighthouse at Dover Castle, and Dover Castle itself may have had earthworks from the Iron Age, before the Roman invasion in AD43. In 1066, after the Battle of Hastings, the Norman leader William the Conqueror set Dover Castle on fire, then once it was in his possession he rebuilt it with new fortifications stronger than ever.

During the reign of Henry II (around 1216) the castle expanded again, adding the inner and outer baileys and the great Keep. At this time French invaders attempted to take the castle, but during a siege the English defenders managed to tunnel out of the castle and attack the invaders – unusually creating the only counter-tunnel in the world – which is still visible in the medieval works!

During Napoleon’s time at the end of the 18th Century, massive rebuilding and remodelling of the castle took place with heavy artillery fortifications being added, as Dover became a garrison town. At this time the tunnels were built about 15 metres below the cliff top to house soldiers and their equipment – at one time there were over 2,000 men housed in the only underground barracks ever built in Britain!

During the Second World War, in 1939, the tunnels were converted into an air-raid shelter, underground hospital and underground military command centre. The Dunkirk evacuation was directed from these cliff tunnels. A military telephone exchange was installed in 1941. There are over three miles of these tunnels going deep down into the chalky cliffs, some still undiscovered. These are closed to the public and too dangerous to walk down.

Dover Castle has had a varied film and TV career, with appearances in the films ‘The Other Boleyn Girl’, ‘Kevin & Perry Go Large’, ‘Johnny English’ and in the TV programmes ‘Doctor Who’, ‘Agatha Christies Poirot’, ‘Most Haunted Live’ and ‘Strange But True’.

Some things to do in Dover: