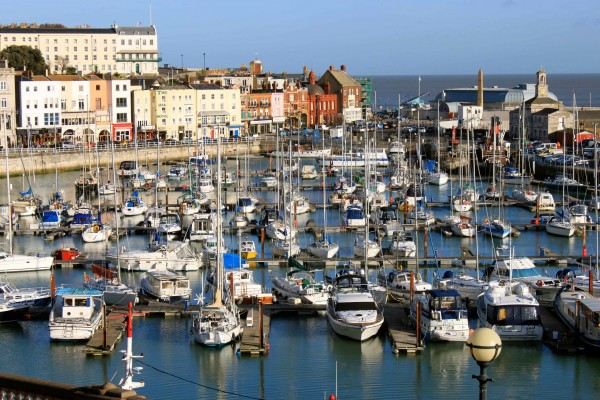 Ramsgate began as a fishing/farming hamlet in medieval times (at least 600AD) called ‘Ramisgate’ or ‘Ramesgate’. The Royal Harbour started construction in 1749 and was completed around 1850. It is the only Royal Harbour in the UK (designated as Royal by King George IV) and has been important throughout history for the Napoleonic Wars and the Dunkirk evacuation in 1940 for World War II, for example. One of the ships that took part in the Dunkirk evacuation is still in the harbour – ‘Sundowner’.

In the 1820s, Princess Victoria (later to become Queen) stayed in Ramsgate and it became a fashionable seaside resort. Other famous people to have stayed in Ramsgate include Jane Austen (writer), Vincent Van Gogh, George du Maurier and James Tissot (artists).

The airport at Manston, just out of Ramsgate was also important during World War II and there are two museums there with historical aircraft which are worth visiting.

Ramsgate has a ferry port and provides cross channel transport to Oostende, Belgium.

Ramsgate has many individual boutique shops from homewares, clothes and jewellery to florists, bakers and butchers.

Ramsgate golden beaches extend either side of the harbour/port with the East Cliff and the West Cliff.

Some things to do in Ramsgate: