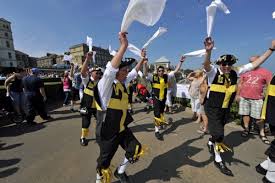 Here in Thanet we are treated to a feast of summer festivals each varying massively from the last. The final festival of the summer season may just be the finest, it’s Broadstairs’ famous FOLK week.

Folk Week takes place all over the town of Broadstairs with over 500 events throughout the week. The Festival campsite is situated close to the centre of the town and has lots of entertainment to keep the family happy.

Broadstairs is beautiful – a traditional seaside resort with seven sandy bays and an incredible buzz during the festival.

In the 50th anniversary year, we are celebrating the origins of Broadstairs Folk Wek as a traditional dance Folk Show – and we are inviting you all TO DANCE!

EiM will be offering a Friday afternoon trip to Broadstairs as well as a planned evening tour of the town’s finest folk filled pubs.

English in Margate 2 months ago

If you haven’t already, you have to try the @tobycarvery #fullenglish, a traditional English breakfast that dates… https://t.co/Ht6ZVxjBvU

English in Margate 2 months ago

English in Margate are one of the only language schools that offer students its very own, on-site, social club with… https://t.co/hfBnuQmxPW

English in Margate 3 months ago

Now in its 11th year @broadiefoodfest takes place next weekend, 4th-6th October.
Head down to experience some of t… https://t.co/DVebc9OlyK

English in Margate 4 months ago

An exciting new #JobOpportunity has arisen for a Native English Language Teacher available from September… https://t.co/XSheONIXVR

English in Margate 6 months ago

English is a universal language spoken by many countries worldwide, and a very useful skill to acquire. It can help… https://t.co/cChxnH7BUO